Home / World / Lieberman will not be boss FBI 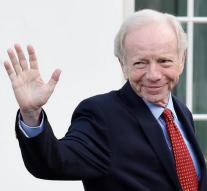 washington - Former senator Joe Lieberman will not be the head of the US federal detective FBI. He has withdrawn as a candidate to follow the fired James Comey, so he told Thursday.

Lieberman thus avoids conflicts of interest. The Democrat works for Marc Kasowitz's law firm. The latter was hired by Trump as his private lawyer. Kasowitz had previously worked for Trump.

Lieberman, according to sources, was the biggest contender to follow Comey.