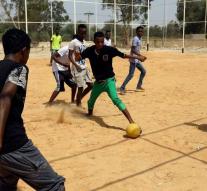 tunis - Hundreds of imprisoned migrants in the Libyan capital Tripoli have been left to their fate by their guards. That happened after battles broke out in the neighborhood. According to an anonymous counselor, it is a detention center in Ain Zara, where an estimated four hundred migrants are trapped.

In the neighborhood, fighting broke out between rival combat groups in recent days. The staff of the detention center has taken their legs. The detainees have been without food for days.

Libya is a chaos since dictator Muammar Kaddafi was killed in 2011 by militias backed by NATO. Gaddafi during his regime was also in charge of the then human smuggling through his country, from Africa to Europe. Since then, all sorts of clans and gangs have been involved. Anarchy has attracted many smugglers and jihadists, while the tribes and clans attack each other.