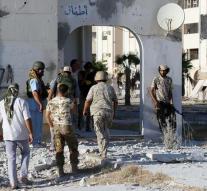 - Has lost the confidence of parliament by the United Nations recognized government of national unity of Libya. A majority of the members of the parliament also recognized by the international community voted Monday for a confidence vote.

Of the 101 MPs who showed up there 61 voted for the motion of censure. Only one voted against. Many parliamentarians who supported the unity government, called GNA, did not attend. Previously she complained repeatedly that their opponents intimidate them and vote made impossible. The parliament had not met since last spring.

UN envoy Martin Kobler recently admitted that the GNA partially has lost the popularity of her honeymoon. Kobler called again to rally themselves behind the government's numerous rival militias in Libya. That support would be needed to Islamic State, to be able to dislodge himself last year firmly nested in Libya.


It is unclear whether the confidence vote the government forces to immediately resign. She does the stature of the GNA anyway no good. The national unity government represents precisely every effort to establish its authority and many Libyan armed and stakeholders to unite behind him.

The UN hoped that the GNA would be able to resolve the discord in Libya. Since militias ousted the elected parliament in 2014 from the capital Tripoli, Libya had two governments and two parliaments.