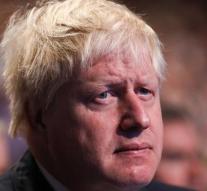 Johnson made some kind of joke when he talked about economic growth in the country. According to him, the Libyan city of Sirte only had to 'clean the dead bodies' to grow into a new Dubai.