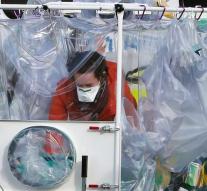 Mainly exports fell almost silent. The worst Ebola epidemic ever lasted more than a year, until July 2015. At its peak, about four hundred people became ill a week. More than 11 200 people died of the deadly disease in Liberia and neighboring Sierra Leone and Guinea.

The country is now trying to scramble back, but it does not really yet. According to the Minister of Finance and Development, Boima Kamara, the country needs the money to invest in new sources of energy for industry. The farm must be helped back underway.

The country has been significantly cut in order to free up money and counts on contributions by the World Bank and the International Monetary Fund..