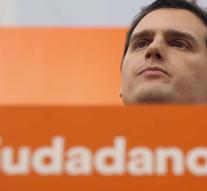 madrid - The leader of the Spanish right-wing Liberal movement Ciudadanos (Citizens), Albert Rivera, demanded new elections from Prime Minister Mariano Rajoy. He said that he would otherwise consider supporting a vote of no confidence against Rajoy, which is being handled by the Socialist party PSOE Thursday and Friday in the Spanish House of Representatives, the Congress of Deputies.

Rajoy leads a minority government. He is of the conservative People's Party (PP) who has been discredited by a dragging trial against businessmen and drivers who for years systematically committed fraud, paid bribes and evaded taxes. The case was mainly about regional PP prominent people. In the verdict last week, the defendants were sentenced to prison sentences of more than thirty years.

The PP itself was not seen as perpetrator or accomplice, but the party was fined EUR 245,000 due to his negligence.