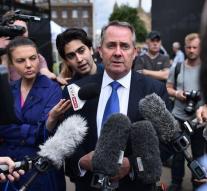 london - The British Conservative Defence Secretary Liam Fox wants his party succeed David Cameron as prime minister of Britain. In an interview with the BBC he said he will announce his candidacy Thursday officially.

Fox (54) is the second candidate after the Minister for Employment and Retirement Stephen Crabb, which appointed itself as successor to Cameron. Boris Johnson, a leading proponent of Brexit, is widely considered the leading candidate, but he has said nothing about the succession.

Prime Minister David Cameron was Friday, the day declared after the decisive referendum on British membership of the European Union, that he will resign.