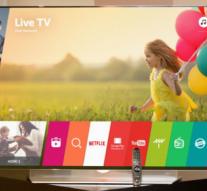 - Electronics giant LG brings in 2016 a new version of its TV operating system WebOS. In version three must be, among other things easier to organize the Internet video streams.


LG is working with a relatively new company called Xumo. The software allows users to browse web streams like they are TV channels. In addition, there is a so-called IoTV-app with which it is possible to control of, among other things LG smart devices.
Also new is the ability to display with Multi-view not only several channels, as well as multiple inputs. For example it is possible to display both a TV channel as the image of a connected game console. Finally, there is Mobile Connection, which allows the user image of supported mobile apps to show on the big screen.
WebOS comes at LG new TVs that come out in 2016.
NEW