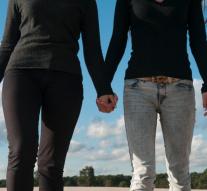 rabat - Human rights organizations have justice in Morocco Friday called the charges against two teenage girls who are persecuted for dropping a kiss. The trial of the girls, aged 16 and 17 years, is scheduled for this Friday. If the judge she condemns 'sexual deviance', they can get up to three years in prison.

'These two girls can end up in prison simply because they showed affection for each other,' summarizes a spokeswoman for Human Rights Watch (HRW), the case together. Together with the Moroccan Aswat Group for Sexual Minorities HRW also concerned that they get a fair trial. According to their lawyer, the police forced them to sign confessions that they could not even read.

Gay men are regularly prosecuted in Morocco, but to my knowledge it never happened with girls.