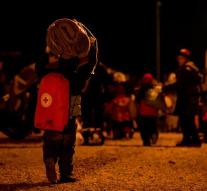 brussels - Over 63,000 minors without guidance from a parent or other minor have applied for asylum in the European Union last year. That's a third less than in 2015, according to figures published by Eurostat Eurostat on Thursday.

Also in the Netherlands, the number decreased, from 3855 in 2015 to 1705 last year. Most (78 percent) were young men, but in 9 percent of cases, children were under the age of fourteen. Of all minor asylum seekers in our country, 27 percent were alone in flight.

2015 was a record year in which 96.500 of these asylum seekers were registered, according to Eurostat. It was almost all boys (89 percent) and more than a third was sixteen or seventeen years old. 10 percent was younger than fourteen years. More than half came from Afghanistan or Syria.