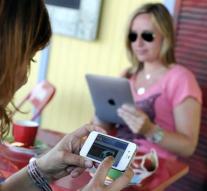 amsterdam - Almost one in five Dutch would like to be more often offline. According to a survey by Gallup on behalf of Nuon.

A majority of respondents say they find it annoying always having to be online. Especially young people between eighteen and 24 years found that affected their social life among eg smartphones and tablets. Many people say they want more personal contact with friends, family, partner and their own family. In women, the need for ' real contact ' is greater than men.More than a third say they are disturbed by people who are always looking on their smartphone or tablet. That frustration appears to be greatest in Friesland, Groningen and Drenthe.
NEW