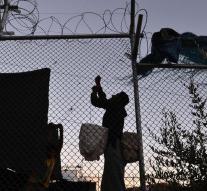 - On the Greek island of Lesbos is working on the temporary restoration of a large refugee camp was destroyed by fire on Monday. The Greek newspaper Kathimerini reported on Wednesday that now half of the estimated 4,400 migrants from the camp is returned.

Monday destroyed a large fire at least 60 percent of the shelter. The inhabitants fled and scattered across the island. Police have detained nine migrants because they are suspected to have caused the fire.

The authorities on Lesvos would prefer not to camp rises. The Minister for Migration, Ioannis Mouzalas, has promised that the island is relieved and that the number of refugees is reduced. According to the 5800 all migrants mayor of Lesvos, there are and there is no relief for many people. The Ministry of Shipping has announced to send a ship to accommodate the migrants. That would be in the course of Wednesday moor the port of Mytilene and oplaats provide approximately one thousand people.

The government sees the refugees as persons under the EU agreement with Turkey on 19 March have returned to Turkey. It would, according to Athens would be better to send the refugees to nearby Turkey. But the process is slow. Since March, there are only five hundred migrants from Greece to Turkey returned under agreement dated March.