Home / World / Lesbian women in Malaysia are being beaten up 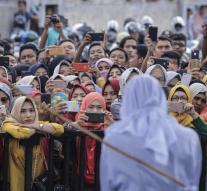 kuala lumpur - Two lesbian women have been beaten up. Sex between two women has been banned since Sharia was introduced.

Despite protests from action groups, the police have continued. The women, 22 and 32 years old, were arrested in April and were stuck all the time. They were caught kissing in a car. That happened in a conservative district of the country.

A judge sentenced them to six strokes each and a fine of 690 euros.

The violence against gays and lesbians is increasing rapidly in Malaysia, according to press agency AFP. Since the introduction of the Islamic Sharia, multiple attacks have been reported.

The punishment with the rattan will certainly take place 10,000 times a year in Malaysia, according to Amnesty International. Specially trained 'stick officials' carry out the punishments. They practice a lot on sandbags. The profession is popular because it generates extra salary.

In Malaysia, prisoners wear a loincloth that exposes the buttocks and are tied to a bench. Victims usually leave scars to the brutal abuse.