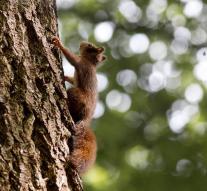 london - By red squirrels in Britain and Ireland has been a remarkable diagnosis: they have a medieval form of leprosy among the members. The public is reminded some distance to keep the popular animals, though the chance is very small infection according to scientists.

British media report Friday that an investigation by the DNA of 25 dead squirrels all copies had leprosy virus. The animals were found on the island of Brownsea, in a bay of the county of Dorset. The study leads to the conclusion that the animals on the island for years, perhaps even centuries, carry the disease in itself. Appearance of the leprosy squirrels were swelling and hair loss on the ears, muzzle and paws.

Also at squirrels in Scotland, Ireland and recorded on the Isle of Wight was leprosy.

The chance that rising human leprosy, is limited by natural defenses. About 95 percent of people is immune. Britain is set for the last time in 1798 leprosy in a human. Annually brings a dozen people with the disease from abroad, but which can be treated effectively.