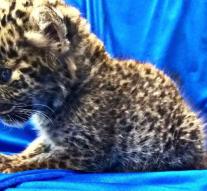 chennai - At the airport of the Indian city of Chennai, a leopard cub of just one month old has been rescued. The animal was hidden in a suitcase of a passenger.

The person who had hidden the cub in his suitcase was arrested. The case may have something to do with the trade in wild animals. A customs officer told Indian media that the man came from Bangkok and he did his utmost to avoid security people.