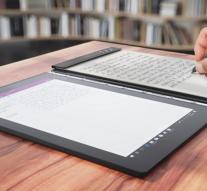 - Before the start of the IFA electronics fair in Berlin, Lenovo has unveiled a range of new prudcten. Most notable is the new tablet Yoga Book and customizable smartphone Moto Z Play, for which cooperation was established with Hasselblad and JBL.

The Yoga Book is a 2-in-1 tablet with a fixed part that can serve both as a keyboard and writing and drawing section. It is equipped with a hinge system that you can clap him inside out if you need only the tablet area. When you have to work, you can use the Yoga Book and laptop.

The virtual keyboard will be a lot of people getting used to, but according to Lenovo gets used within an hour. The tablet will learn from your tapping behavior. If it detects that your spacebar always low strike, then you can continue to do so seamlessly and still get a space on the screen. With the press of a button, the keyboard disappears and you can use a pen to write or draw on the now empty field. The screen displayed the smooth creations.


A large number of people still prefer to write on paper and that Lenovo has a solution. A notepads supplied and two points for the pen (one acts as a stylus, the other as pen). Place the block on the plane and just take notes with ink. The text is automatically saved in the Yoga Book. The block can supplement with their own paper and pen for a conventional ink cartridge can be used.

The Android version of the Yoga Book is available for € 499 in September. The Windows version is more expensive with € 599. The difference between the two models lies mainly in the license from Microsoft where Lenovo has to pay for. Yoga Book features a 10.1 '1920 x 1200 full HD display, Intel Atom X5 processor, 4GB of RAM and 64GB storage. The battery lasts 15 hours.

The Moto Z Play stands out for its long battery life, 50 hours, and its magnetic back. These can be equipped with a stylish front panel, but it does not stop there. Lenovo teams up with different partners for the so-called Moto Mods. Thus, for the snap camera attracted well-known photography brand Hasselblad.


The Moto Z Play consists of a thin, lightweight design with an aluminum frame and glass back. If the batteries are empty after 50 hours, then the unit with the Turbo Power to land up to 9 hours 15 minutes. Furthermore, the device has a 2. 0 GHz octa-core processor, a 5. 5 '1080p HD Super AMOLED display and 3GB of RAM. The built-in camera is 19 megapixels. The Moto Z Play is available in September from € 449.

The Hasselblad True Zoom includes a 10x optical zoom and a Xenon flash that good photos can be made. In addition, there is also the option to shoot in RAW format, which makes for even more control and flexibility. This Moto Mod cost another € 249 extra. There are also Mods for an extra speaker (with JBL), extra battery acid of 22 hours and a projector that can project your images on the wall.

Furthermore, Lenovo showed during the event Yoga 910 (€ 1,499). This is available with both a 4K as a full-HD display, and is provided with a fingerprint scanner to log in quickly. The tablet Miix 510 (€ 699) comes with a detachable keyboard and a stylus. Both products are expected in October.