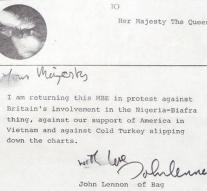 london - A letter in which the former Beatle John Lennon to Queen Elizabeth explains why he refuses a royal honor, has surfaced in an album cover. This is probably a draft of the letter is now in the royal archives. It reports the British newspaper The Guardian Friday.

In the letter of a total of five lines Lennon tells the queen that he gives up his membership of the Most Excellent Order of the British Empire (MBE). ' I give back this MBE as a protest against Britain's involvement in the Nigeria-Biafra thing, against our support of America in Vietnam and against Cold Turkey bags in the hit parade. 'Cold Turkey was a single of Lennon's Plastic Ono Band.

The current anonymous owner tipped the album cover twenty years ago for £ 10 (11 euros) on the head at a flea market. An appraiser estimated the current value Wednesday at 60 000 pounds (66 500 euros). Darren Julien, an expert in the field of music memorabilia, suspect that Lennon eventually a second version sent because being on the original ink stains.

The accepted in 1980 murdered rock star had the distinction in 1965.