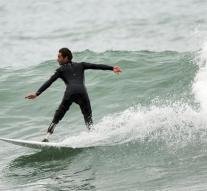 saint - It is his way of taking revenge on the shark bit off his leg in 2011 back on the board as quickly as possible. And now the 39-year-old Eric Dargent do it again.

For several days after he lost his leg during a vacation to Réunion he decided to climb back on board, the Frenchman says to news agency AFP.

\'My leg was torn off in a few seconds,\' says the surfer. \'I had it all the way through. Luckily I was not far from the coast. \'

His leg had to be amputated above the knee and doctors told him he had better choose another sport as a replacement was impossible.

But Dargent lay not down. Along with Patrice Barattero who can snowboard with his prosthesis, and an orthopedist he developed an artificial limb that he could surf though.

That was a challenge, because the prosthesis had to sea water, low temperatures and severe shock can. The latter problem was solved by using a shock absorber of a mountain bike.

With his artificial leg Dargent, the waves are attacked again. \'This gives me motivation and energy. This is revenge, \'said Dargent. \'I have the same fun again. Maybe even more. I forget my handicap if I am in the water. \'

Thanks to the prosthesis surfer can even participate in the championships again.