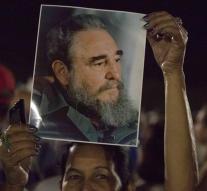 havana - ' Viva Fidel, '' shouted thousands of Cubans Tuesday from the Revolution Square in Havana. Together with head of state Raul Castro and leftist leaders of friendly countries, such as the President of Venezuela Nicolas Maduro, Bolivian President Evo Morales, Jacob Zuma of South Africa and Robert Mugabe of Zimbabwe, they commemorated their deceased former leader Fidel Castro.

The leader of the revolution that the service for decades belonged on the island, died Friday at the age of 90. With fiery speeches, he was commemorated. ' We and our self-sacrificing, heroic and combative people say to you, always forward to victory, '' said Fidel's brother Raul. Maduro said that Castro ' mission accomplished on this earth. ' ' Few lives were so full and radiant. He left unconquered. ''

Cubans outside the capital in the coming days will also get the opportunity to pay their last respects to the communist leader. The urn with his ashes will be through various towns and villages from Havana to Santiago. Since Sunday the funeral.