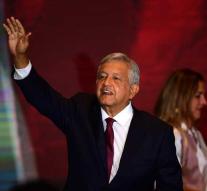 mexico city - The left populist Andrés Manuel López Obrador has won the presidential elections in Mexico. According to exitpolls, he got between 43 and 59 percent of the votes on Sunday. Obrador's main rivals, Ricardo Anaya Cortés of the center-right conservative PAN and José Antonio Meade of the ruling center-left PRI, congratulated him on his victory.

The 64-year-old former mayor of Mexico City, who participated twice in the presidential election, campaigned for the fight against crime and corruption. He also promised to combat inequality and make Mexico economically less dependent on the United States.

In addition to the president, the approximately 89 million voters could also elect parliament and thousands of regional and local administrators.