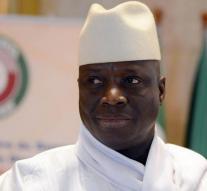 banjul - The former president of Gambia, Yahya Jammeh, has left the land to make way for the elected president Adama Barrow. Reuters reported that according to eyewitnesses and mediators.

Jammeh stepped on the airport of the capital Banjul on a plane and being left for an unknown destination. This puts an end to a presidential crisis arose because Jammeh did not accept the results of the presidential elections and refused to leave.

West African countries of ECOWAS have put pressure on Jammeh joint military threat to leave. Barrow is Thursday at the Embassy of the Gambia in Senegal sworn in as president.