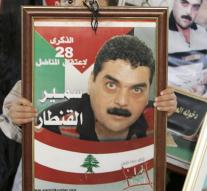 damascus - The militant activist Samir Qantar has been killed by an attack on a residential building in the Syrian capital Damascus. This was reported by the Lebanese Islamic movement Hezbollah, which accused Israel of firing.

Supporters of the Syrian government stated on social media that the building in which Qantar stayed early Sunday morning was hit by several missiles. Possibly it is a air strike. According to Syrian state media are terrorist groups behind the attack.

Qantar was previously a life sentence in Israel, where he committed an assault as a teenager in 1979. Qantar was released in 2008 as part of a prisoner exchange and then disappeared from publicity. He reportedly had a high rank in Hezbollah, which supports the Syrian regime.

The Israeli minister Yoav Gallant told Israel Radio not to be sorry for the death of Qantar. He would not confirm whether his government is responsible for the attack.