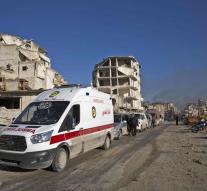 aleppo - Twenty green buses have picked up the first refugees in eastern Aleppo. In this district are an estimated 5,000 rebels and their families ready for transport to places outside the city.

The Russian Defense Ministry confirmed that the first buses filled with refugees and have gone the way. Especially for this convoy by the warring parties agreed to a safe corridor of 21 kilometers length.

Also drive again ambulances to evacuate from the eastern district of wounded and sick. The deployment of ambulances was suspended earlier Thursday morning after several cars were shot at. There whizzing Turkish ambulances and ambulances of the Red Cross and Red Crescent.