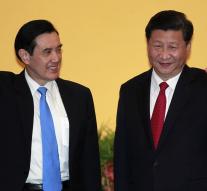 - Under the watchful eye of hundreds shook China's President Xi Jinping Saturday, using his Taiwanese counterpart Ma Ying-jeou. It is the first time since the end of the Chinese civil war in 1949 that leaders of the two countries meet.

The Chinese news agency Xinhua called a historic meeting, to be held at the Shangri-La Hotel in Singapore. The two countries are at loggerheads with each other. Taiwan is an independent country, but China regards the island as a renegade province. It wants Taiwan back to China.

Xi said after the handshake that the Chinese people on both sides of the Taiwan Strait, the strait between Taiwan and China have the ability and wisdom to solve their own problems. " No power can pull us apart, we are a family ", said Xi.

Ma responded by saying that he was bent on promoting peace and that the relationship between Taiwan and China must be based on honesty, wisdom and patience. " Both sides should respect each other's values ​​and ways of life. "

The difficult relationship started after the Chinese civil war. Chinese nationalists weeks in the last phase of the battle to Taiwan when the communists prevailed in China. That country therefore sees Taiwan as a renegade province. Taiwan, which is formally called Republic of China, saw a connection with communist China not sit.