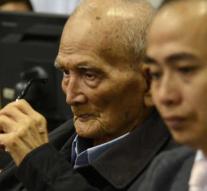 It is the 92-year-old Nuon Chea, better known as Brother Number 2 and the former president Khieu Samphan (87). They have been found guilty of crimes against humanity and genocide by the Cambodia Tribunal, which is supported by the United Nations.