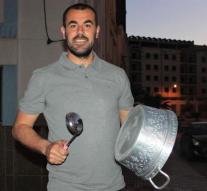 already - The 'face' of the violent protests in northern Morocco, Nasser Zefzafi, 39, was arrested on Monday. Zefzafi has declared himself leader of the protest that broke out in the Reef region. He had been fugitive since Friday and was hid.

The authorities accuse him of an attack on freedom of religion. They aim for a protest during a Friday prayer. Then Zefzafi called for blasphemy, among other things, towards imam who led the prayer service. The police wanted to keep him in his house in al-Hoceima on Friday, but battled on evil protesters, according to the news transmitter le360.

The Reef area is poor and feels subordinated by the central government. The region is mainly inhabited by Berbers, a native North African nation, including its own language and culture.

The tension has risen since October. Then there was a tragic incident with a fish farmer whose merchandise was taken. He, according to the protesters of that time, came to life by means of agents.