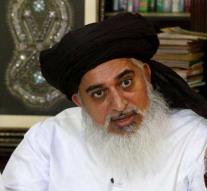 lahore - The Pakistani police arrested the radical muslim-minded Khadim Hussain Rizvi. His son said that the clergyman was arrested in his madrassa (religious school) in the eastern city of Lahore. In the summer, Rizvi was the driving force behind protest marches against Geert Wilders' plan to hold a cartoon contest about the Prophet Muhammad.

Rizvi is leader of the radical-Islamic party Tehreek-e-Labbaik (TLP). That party also took to the streets after the Christian Asia Bibi was acquitted of blasphemy at the end of October. After the arrest of Rizvi, the police in Lahore hit with supporters of the spiritual leader. According to the police, at least five wounded were involved in the confrontation.