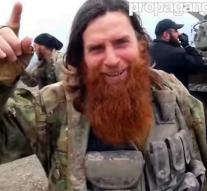 baghdad - US commandos have the infamous ISIS-leader Abu Omar al-Shishani captured alive near the city of Kirkuk in Iraq. This was reported by the Russian news agency Tass. However, the message has not been confirmed by the US Pentagon.

Born in Georgia, the ISIS commander, also known as the 'red Chechen', named after his long red beard, is a veteran of the Russian-Georgian war of 2008. On his head is a reward of five million dollars, promised by the US State Department.

Abu Omar has in recent years been declared dead several times, most recently as May, June and October this year.