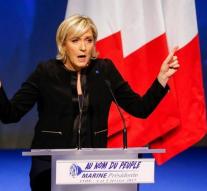 paris - The French politician, Marine Le Pen, will participate in parliamentary elections in her country next month. The leader of the Front National will offer counterbalance to the new president, Emmanuel Macron, in the French Lower House, the Assembly National.

Le Pen recently ruled against Macron at the presidential elections. After all, it remained unclear whether she wanted to go to a parliament seat for some time. The right-wing nationalist politician said Thursday that TF1 had tipped the knot.

According to Le Pen, her participation in the elections is necessary because of the 'conspiracy' between the socialists and the conservative Republicans. The pro-European Macron has included both socialists, conservatives and newcomers in politics in his cabinet.

'We need parliamentarians who are not accomplice and defend the interests of the French and France,' said Le Pen. Surveys show that, at the first round of parliamentary elections, her party is likely to count about 20 percent of the votes.