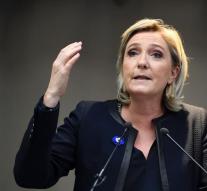 ' Congratulations to the new President of the United States Donald Trump and the American people free! MLP '' twittered the leader of the Front National.

Trump was at the time of posting the tweet by Le Pen formally not yet the winner of the presidential election.