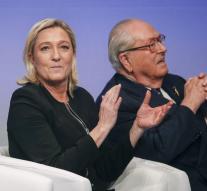 - After the success in the first round of regional elections in France, Marine Le Pen sees her National Front " first party of France". Your party has " a great result " achieved, said Le Pen Sunday to jubilant supporters. " We are called to achieve national unity that the country needs," said the 47-year-old leader of the anti-European and nationalist Front National.

According to first estimates would get the party Sunday 29.5 to 30.8 percent of the vote. Thus, the Front National is well ahead of the center-right coalition of ex- president Nicolas Sarkozy (27 percent) and the ruling Socialist Party of François Hollande (23 percent).

In the second round next Sunday, the Socialists have the support of the Greens and the radical left which can stand together on more than 10 percent of the vote.