Home / World / Le Pen on the carpet for vote fraud 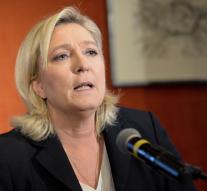 The vote fraud was committed during the plenary session in October in Strasbourg. While Le Pen had left the plenary hall during the voting to go to a rally elsewhere in France, voted two fellow party members among whom there PVV Marcel de Graaff, with her ​​voting card. Vote for another is not permitted in the European Parliament. Offenders risk a reprimand, suspension or fine.