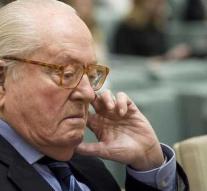 luxembourg - Jean-Marie Le Pen, the controversial ex-leader of the French right-wing populist Front National, has to repay 320,026.23 euro to the European Parliament. That has been determined by the European Court of Justice.

The money was paid by the parliament to a group official whose employment Le Pen senior could not prove according to the parliament. For the same reason, his fellow party member in the EU parliament must return Bruno Gollnisch 275. 984.23 euros in the cash register.

In 2016, the parliament's accountants decided to recover the payments. Then both men went to the court in Luxembourg. That now rejects the professions.

The parliament was already recovering the money by cutting the two FN's on their salaries and daily allowances. Le Pen is the father of the current FN top woman, Marine Le Pen. Legal proceedings are still pending against her for unduly paid compensation from the European Parliament.