Home / World / Le Pen has backed down in European Court 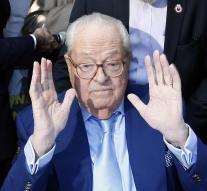 strasbourg - The French judiciary has Jean-Marie Le Pen, the former leader of the radical-right party National Front, not restricted in his freedom of speech. That the European Court ruled for Human Rights Thursday. Le Pen had filed a case against his conviction for Holocaust denial by a French court.

In 2005, the now 88-year-old Le Pen said the occupation of France by Nazi Germany in particular, that it was 'certainly not particularly inhumane'. Le Pen was convicted to three months in prison and a fine, a penalty that was proportionally according to the ECtHR.

It was not the first time that Le Pen was convicted for his statements about the Second World War and Nazi Germany.