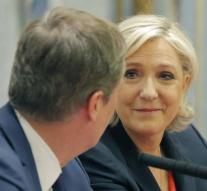 paris - If Marine Le Pen becomes president of France, she will nominate Nicolas Dupont-Aignan as prime minister. That was announced on Saturday afternoon at a joint press conference with Dupont-Aignan in Paris.

Dupont-Aignan also participated in the first round of the French presidential election. He finished last week with 4.7 percent of the votes as sixth.

On Friday, Dupont-Aignan had announced that he would join Le Pen. The foreman of 'Debout la République' called for his support on Sunday, May 7, to support the Front National candidate in the election struggle with Emmanuel Macron.