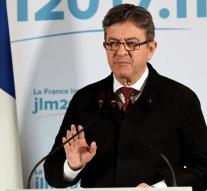 paris - Marine Le Pen directed directly to the electorate of left-wing candidate Jean-Luc Mélenchon on Friday for the second round of the French presidential elections, which fell after the first round.

In a message on Twitter, the presidential candidate from the right-wing Front National called on a 'dam against Macron'. 'Let's shift the arguments and disagreements. We can not leave France's handles to Emmanuel Macron, 'the center politician behind which Le Pen finished second in the first round.

Le Pen and Mélenchon achieved 40 percent of the votes in the first round with campaigns that sparked frustrations about current politics. They are skeptical of the European Union, and hostile to free trade and globalization. However, they think differently about immigration and social issues.

Mélenchon has not yet said which of the two remaining candidates is preferable. However, his spokesman said that 'no vote may go to the Front National. '