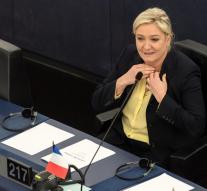 lyon - Marine Le Pen, leader of the National Front in France, was acquitted of inciting hatred during an election campaign, reports the BBC. At an election campaign in Lyon compared them five years ago, the Muslims praying in the streets with the occupation by the Nazis in World War II.

Le Pen advocated in October to the court her innocence. The judge saw last year from further persecution, but the case was revived after a complaint of anti-racism groups.

In the French regional elections booked Le Pen's party last weekend a success. Although the National Front in no region was able to win, it still took the most votes ever and knew thereby tripling its number of seats.