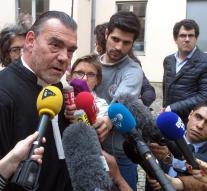 - The lawyers of terror suspect Salah Abdeslam withdraw. The only survivor of the terrorist attacks of 13 November in Paris, shrouds himself for months in silence. He would not want a new lawyer.

Abdeslam continues to refuse in France to make a statement on the attacks. Every time he is brought before the investigating judge, he invokes his right to silence. ' I no longer want to be the lawyer of someone who has decided not to defend, 'said Frank Berton toppleiter in an interview with De Standaard.

French toppleiter and his Belgian colleague Sven Mary left to Abdeslam know that they are no longer his lawyer. ' When we informed him of our decision, Abdeslam told me that he would send a letter to the investigating judge in which he renounced his right to defense, 'said Frank Berton. ' He says that God will watch over him.'

The Standard also reported on the authority of the federal prosecutor Islamic State which increasingly tries to warm minors to carry out attacks in Belgium. The recruitment of young candidates jihadists usually happens through social media. The victims are not only underage boys but also girls. Usually their age hovers around 16 to 17 years.