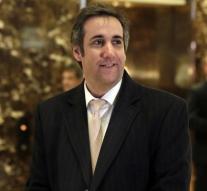 washington - Michael Cohen, Trump's lawyer, and former security advisor Michael Flynn have been sued by a special Senate Commission. The commission wants to question them in investigating any Russian interference with the presidential elections in the United States.

Cohen informed the audience about hearing the call. What Flynn does is still unclear. In an earlier summons, he relied on the Fifth Amendment to the Constitution, which stipulates that no one has to bear witness to himself. Thereafter, two Flynn companies were sued.