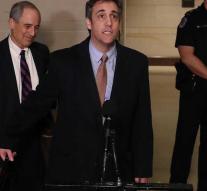 washington - Michael Cohen, the former lawyer and 'fixer' of US President Donald Trump, is filing a lawsuit against the Trump Organization for overdue payments. Cohen says it's...

The lawsuit has been filed on Thursday and will probably extend the bitter feud between the two men, while Cohen himself has to go to jail in May. Cohen, who acknowledged guilt to multiple crimes, has just given testimony before Congress, calling his former boss a 'racist, crook, and a deceiver.'

Cohen claims that he has at least $ 1.9 million in fees and expenses from the Trump Organization.