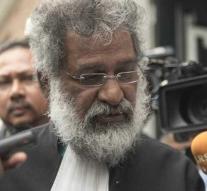 paramaribo - The December murder trial in Suriname is entering a new phase on Monday. The lawyer of main suspect Desi Bouterse, Irvin Kanhai, will respond to the twenty-year prison that the Public Prosecution Service (OM) has demanded against the current president of Suriname.

The trial is about the murders in December 1982 against fifteen opponents of the then military regime led by Bouterse. They were prominent residents of Suriname, such as lawyers, journalists and a trade union leader.

Hugo Essed, representative of the relatives of the victims, takes into account that Kanhai takes the time to prove the innocence of Bouterse. 'He can do that by questioning the reliability of the judiciary and making it politic. But it may also be that he is working less aggressively and perhaps makes a half-regret. '