Home / World / Lawyer Bouterse: The Netherlands was a culprit 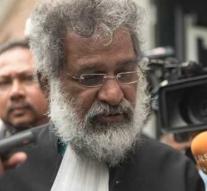 paramaribo - The lawyer of main suspect Desi Bouterse, Irvin Kanhai, immediately turned to former colonizer Netherlands on Monday at the beginning of his plea in the lawsuit about the December murders.

He outlined the circumstances around 1982, when army leader Bouterse had come to power. According to Kanhai, the Netherlands acted as 'the big brainwash machine' with the aim of getting Bouterse away, he said before the court martial in Paramaribo.

Kanhai is expected to spend hours working on his plea.

The trial is about the murders in December 1982 against fifteen opponents of the then military regime led by Bouterse. They were prominent residents of Suriname, such as lawyers, journalists and a trade union leader.

Against Bouterse, the current president, a prison sentence of twenty years has been demanded, as well as against five other suspects.