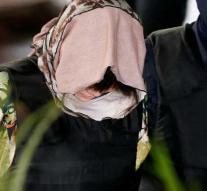 kuala lumpur - Two women suspected of murdering the half-brother of the North Korean dictator Kim Jong-un, are not at liberty. A Malaysian court ruled that there is sufficient ground to continue the case.

Kim Jong-nam was murdered at the airport of Kuala Lumpur on 13 February. The women would have smeared nerve gas in his face. They say they are innocent and claim that they were under the impression that they were cooperating in a joke for a reality TV show. They can get the death penalty if they are found guilty.