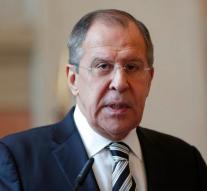 moscow - The aim of the consultations on Syria in the Kazakh capital Astana to reach a ceasefire and to strengthen it.

Lavrov also called on the United States to attend the concert. He thinks only right and said he hoped that Russia and the elected US president Donald Trump can work better than Moscow did with the Obama administration.