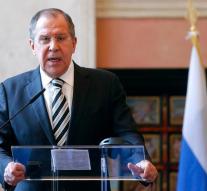 hamburg - Russian Foreign Minister Sergey Lavrov said Thursday that the past should be with the ' war rhetoric of the West ''. The impression that Russia is a threat, is a myth ' '' Lavrov complained visiting Hamburg. He is there with many counterparts at the conference of the Organization for Security and Development in Europe (OSCE).

Lavrov made a plea for an equal dialogue ' '' and suggested stop to blame each other. Specifically, he mentioned the conflict in eastern Ukraine. According to Lavrov, the government should talk again in Kiev as soon as possible with the pro-Russian separatists. Formally, there is a file of strength, but which is extremely unstable and frequently fly mortar shells over and over again.

Ukraine also had a message for Russia at the summit. According to Foreign Minister Pavel Klimkin is that peace is delayed the Moscow debt. He also reiterated once more the Ukrainian requirement that the Russians withdraw from the annexed Crimea peninsula.