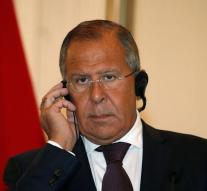 moscow - The risks of a military conflict over the North Korea nuclear program are very high, says Russian Foreign Minister Sergei Lavrov. According to the minister, Moscow is deeply concerned about mutual attack threats by Washington and Pyongyang.

'The side that is stronger and smarter,' should take the first step to alleviate the crisis, Lavrov told the Russian state television. He encouraged Pyongyang and Washington to join a joint Russian-Chinese plan to neutralize the crisis. According to this plan, North Korea should freeze its rockets and the United States and South Korea should, in turn, stop major military exercises.

'If this double freeze finally takes place then we can start from the outset and sign a paper that will underline respect for the sovereignty of all parties involved, including North Korea,' said Lavrov.

But the Pentagon almost known at the same time that a joint US military exercise with South Korea begins as scheduled on 21 August. It's about an annual military exercise, under the name of Ulchi-Freedom Guardian, said Lieutenant Colonel Christopher Logan, a Pentagon spokesman.

'Unfortunately, rhetoric in Washington and Pyongyang is getting over the top,' said Lavrov. 'We still hope and believe that common sense will prevail. ''