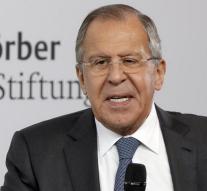 Former President Barack Obama gave orders in December to two seized Russian buildings and 35 Russian diplomats to expel the country. According to Obama, they were involved in hacking the American election campaign. Something that categorically denies Russia.

Moscow has said that much will depend on the outcome of a meeting in Washington later on Monday between Russian Deputy Foreign Minister Sergej Riabkov and US Secretary of State for Foreign Affairs Thomas Shannon discussing the diplomatic dispute.

Lavrov said during a visit to Belarus that the 'anti-Russian feeling' in the United States means that Moscow and Washington can not agree on major global issues.