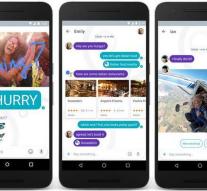 Several media indicate that rumors that the launch will take place Wednesday. If so, remains to be seen. Well Google have previously indicated that the chat app would be available this summer. Thursday begins the astronomical autumn.

Allo is available for Android and iOS. Users can also chat old Allo next full use of stickers and emoji. Nothing special, but what Google differently than the competition is that it gives users the ability to influence the tone of their conversation. Who wants to shout something, emoji can make bigger and the opposite is the case with things that people prefer to whisper.

Another unique feature of Allo is the ability to use automatic replies suggested by Google. Google scans incoming messages and then displays a number of options. For example, anyone getting a picture of a good plate of pasta, Google will have the opportunity to reserve a seat at an Italian restaurant in the neighborhood, can return a yammie' emoji or can search for recipes of pasta. This functionality is somewhat reminiscent of the bots that Facebook has recently invested in its Messenger app. The source behind the automatic answer is also integrated into Google Home Assistant.