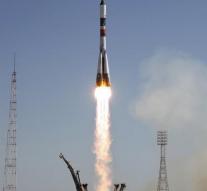 almati - A Russian Progress capsule was launched Wednesday from the Baikonur Cosmodrome in Kazakhstan. The capsule brings supplies to the International Space Station. December was the launch of a Progress capsule still in failure; six minutes after launch, the spacecraft crashed.

Progress capsule was launched by a Soyuz rocket from the Russian launch site and should arrive in two days at the ISS. Later Wednesday arrives at the ISS, if all goes well, a Dragon capsule by SpaceX. Astronauts will attach the Dragon with a special robotic arm on the space station.