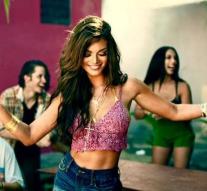 new york - Latin singers and singers scored the most views on YouTube this summer, so the video site was known. In the top 25 most viewed summer hits, there are 16 songs from an artist from Latin America. Despacito is in the first place.

According to Billboard, the success of the number Despacito contributes to the popularity of Latin music. Artists such as Shakira and Maluma from Colombia are both in the YouTube hit list with Chantaje and Felices los 4 respectively. Also their countryman J. Balvin scored the fourth place on YouTube's summer hit list with the Mi Gente track.

At the end of August, the number Despacito of Luis Fonsi, Daddy Yankee and Justin Bieber already recorded a record in the US as the longest listed number 1 on the Billboard Hot 100 hitlist. Fonsi responded to the news about the record at the time. 'This is a historic day for Latin music. I'm very grateful to the fans and feel blessed,' said the 39-year-old singer in a statement.

In addition to the rise of Latin music, the music of artists like Ed Sheeran (Shape of You), Kendrick Lamar (Humble) and Taylor Swift with her new album Look What You Made Me Do, has been watched and listened to YouTube this summer.